25, Leaf from an Early Psalter 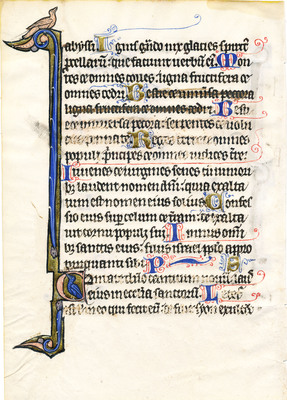 A portion of the text is repeated by the scribe, an error which was rectified, presumably much later, by someone who has inked through the repeated passage, which is still legible. Some words are also inked through on verso.

Text is from Psalm 148 with the very end of Psalm 147 and the beginning of Psalm 149. This is an uncommon example of an early leaf where the illuminators' marginal embellishment (including snakes and birds) reflects the text, which, translated, reads in part: “Praise the Lord ... all ... beasts, and cattle, creeping things and flying fowl.”